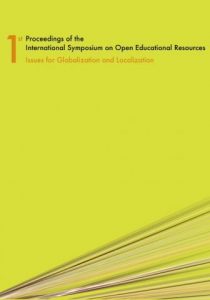 This founding symposium is focused on discussing issues related to the reuse of digital content for formal and informal education. The movement, which is commonly known as Open Educational Resources (OER), has been gaining momentum around the world through major projects sponsored by universities, governments and independent organizations. Seed funding supported many of the major projects, which are now being followed by governmental investments in the development of educational materials with open licensing. The number and quality of these resources continue to grow, but an important question remains. How can these resources be accessed, reused, revised, remixed, and redistributed effectively? The concerns are mostly based in two fields: first, a technical concern in the infrastructures necessary to produce and disseminate ever more flexible resources; second, cultural concern with the possibilities that are made available by technical “openness” but nonetheless exclude the non-target audience from making use of these quality resources. Within these broad themes, the symposium will focus on the localization of OER, particularly as it concerns those involved with K-12 education. The second edition of the Symposium is scheduled to occur in Brazil in mid-2012.